Works in mixed media on canvas

Andrew's exhibition of nine mixed media paintings on canvas were all of sea birds, including three species of penguin. The layers of mediums used were luxuriously thick, creating textural, painterly works. He wrote of his painting methods: “Having an industrial background the works are usually conceived with power tools, with a self conscious decision to use ply wood holding an appeal when covered with layers of enamel, acrylic, and spray paint … a hybrid composition emerges before an image emerges.”

There was a series of four baby penguins, with changes to the colours of the body and background in each, also subtle changes to the posture and direction of gaze. Baby Penguin 1 and Baby Penguin 2 appealed to me the most. One was blue on an ochre-yellow background, the other silver-grey on a blue-grey background and appearing to pause in its strutting to eye the viewer. In this work, Andrew had scraped back parts of the top grey paint to reveal warm orange flashes of the layer below. 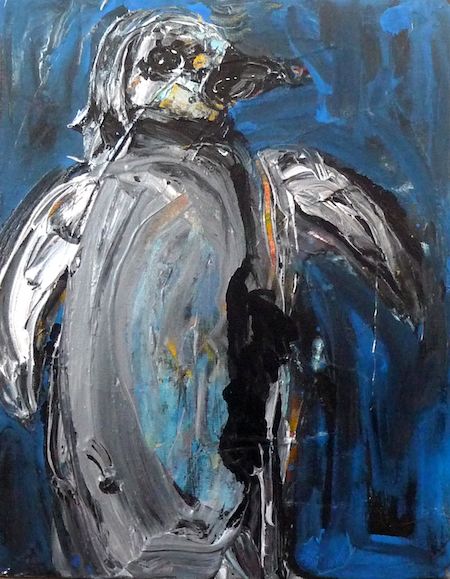 The Gentoo Penguin had a much thicker, stronger beak than the babies (species unknown). Gentoo Penguin Swimming was a very lively work, with sweeps of paint for the moving water and the penguin's flippers, with dramatic flashes of red against blue and black.

The Macaroni Penguin, with its red beak and shock of yellow head feathers, reminded me of an eccentric band conductor in a suit. The Puffin, with its big orange beak and red feet, showed layers of paint – light on dark, dark on light – with flashes of the previous layer showing through. The Pelican held its beak tightly to its neck and chest – in a way, a simplified, contemporary impression of a pelican. As in Andrew's other works, the details are textural, the features formed in slashes and sweeps of paint.

I found Andrew's birds very appealing – as creatures, in their forms and gestures, and in their rich, painterly construction. I enjoyed. 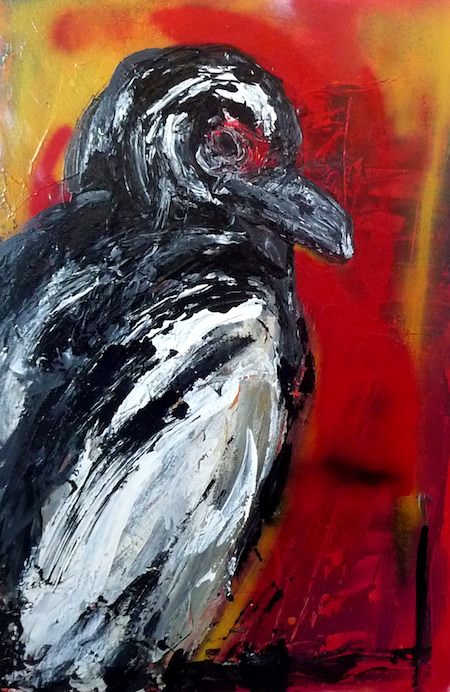