Sculptures in ceramic, bluestone and metal by Evelyn Young

The Budgeon's display case in the Richmond Library foyer

Evelyn Young's display, titled Women's Business, featured four beautiful and thought provoking sculptures, with accompanying support material and preliminary sketches. She has created a series of works as an exploration into the collective consciousness of women throughout history. 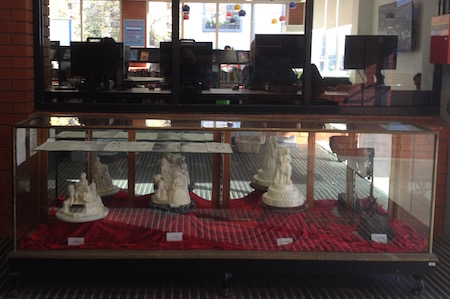 In her support material, Evelyn wrote: “From raising families, to leading armies, women have played a largely unrecorded role in shaping our history.” Her women in this delightful collection were indeed strong and influential people, from priestesses and prostitutes, to rulers and muses, and more, so numerous are the roles of women throughout history.

The snowy white ceramic sculpture, Two Marys, showed two women of different demeanour and background but both following the same spiritual path, Mary the saint in full gown and Mary the prostitute in camisole and thigh boots, the sexual and the asexual. As Evelyn wrote: “Mary Magdalene and Mary mother of Jesus represent the Sinner / Saint scenario. The girl you date, verses the girl you take home to meet the family. Magdalene had the unsavory reputation as a prostitute, contrasted with Mary of Nazareth, the perpetual virgin, full of disciple, purity and faith.” 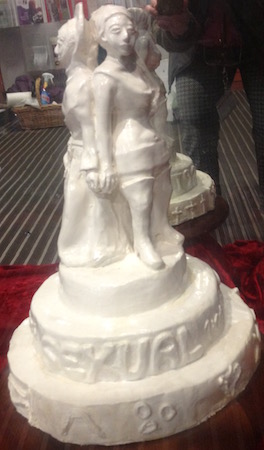 The two other snowy white glazed ceramics, Choices and Ladies, depicted collections of women. The five ladies in Choices, all sedately seated, each seeming to be in contemplation of her beliefs and pathway, all strong women and leaders in one way or another, from historical figures to a young mother-to-be. From Evelyn's notes: “Queen Elizabeth the first, Joan of Arc, Mother Teresa, and many other strong women have devoted their lives to causes they believe in. Some of these women have chosen their pathway through life, others have been thrust into roles that gave them a small measure of living a life on their own terms, not an easy accomplishment in a patriarchal society.” 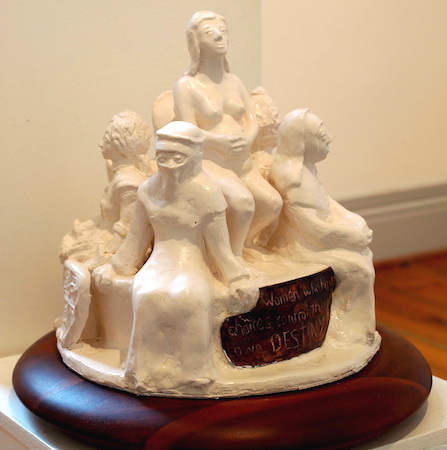 The particularly delightful Ladies – a geisha, a courtesan and an artist's model – seemed to have a matter-of-fact air about their sexuality, maybe each resigned to her role? Again I include Evelyn's excellent notes on her works: “In the history of art you will see many examples of female sexuality being used as a commodity. The mistresses, muses, courtesans, geishas, and escort girls have all played a strong role in inspiring different artists in the creation of strong sexual themes in their works. These relationships have lead to the creation of some of the greatest masterpieces which have been made. The entanglement of artist and model / muse usually ended badly for the model in question, but did inspire the artist to produce some of their greatest masterpieces.” 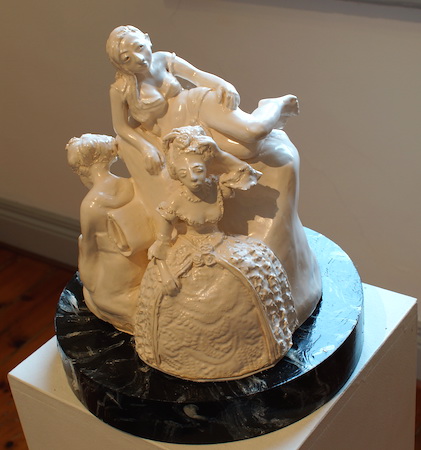 Lastly, a work titled Confined which represented a medieval chastity belt, in wrought iron and mounted on a block of bluestone. Well fashioned, with medieval motifs and attached to a key-like structure, the bluestone block making a perfect base. In the 16th century, I imagine these things might have been terribly uncomfortable! “The wrought iron chastity belt was thought to be designed in the 16th century during the Crusades to maintain a woman’s chastity. The belt prevented rape and temptation from occurring.” Looking more like an instrument of torture than of protection, fortunately it was empty, standing as a symbol of another female role of the time - property. 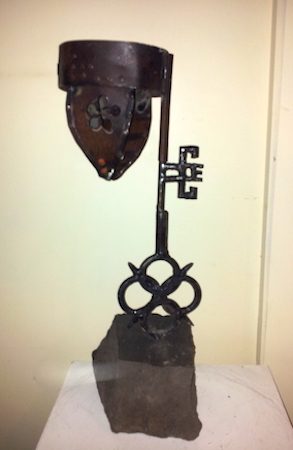