Jan Delaney’s exhibition of 12 paintings in oils, acrylics, ink/acrylic and mixed media explored the interactions between the elements, plants and animals and rock formations. Of her work, she wrote: “Elements of light, wind, fire and water come together with minerals, living plants and birds to create colour and movement. This is how phenomena in nature occur, and why despite the ‘rules of nature’ they can appear so different.”

Many of Jan’s works featured the natural phenomena of lighting effects on landscape, sky and water. Autumn Light depicted the dappling effect of sunlight on vegetation as it filtered down to the ground through tall trees - white orbs against the softly coloured plants, earth, stone and sky. Deflected Sun Rays depicted shafts of light underwater - bright orange streaks of light playing in the deep blue water amidst sea weeds, with a clear blue sky above - as viewed whilst Jan was snorkelling in a coral reef in Vanuatu. The inspiration for Galactic Prisms came from crystal in her sun room as the effect of sunlight formed coloured balls of light that swam around the room. Dry Weather showed bright, strong sunlight on an arid outback landscape. 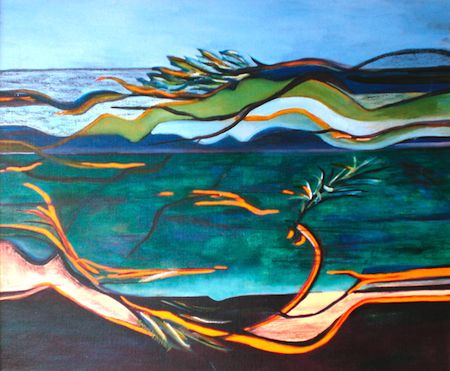 Other natural phenomena in Jan’s works included fish and birds. The Fish was a silvery fossil in a rock face. In Rock Flight, birds were depicted as being part of a rocky outcrop, separating and flying out from the rocks, showing the connectivity of these creatures and their habitat.

Trees and landscapes also featured strongly, showing her love of the land and the branched formations of trees. The Off Shore View of stark, gnarled coastal trees against sand dunes and green hillocks against the deep blue water showed the three planes of land, sea and sky. In some of her works, the viewpoint shifted between vertical and horizontal, from land level to aerial. In Seasons Change, with its areas of water and weather effects interspersed with tree branches, depicted not the change of seasons as its title suggested, but how planes or viewpoints can change (up-down-sideways, past-present-future), and the way they change as the seasons do.

I enjoyed these sensitive works, their colours and their thought-provoking content. 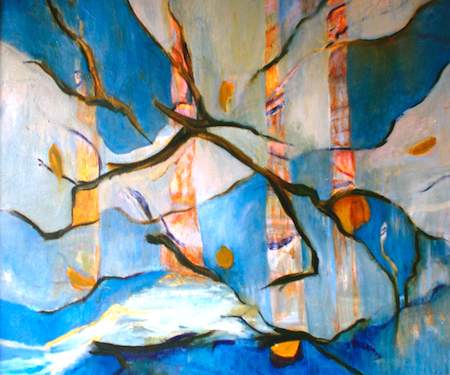