Mexico Past and Present

Graham, Melbourne born, spent 36 years in Mexico, and his love for that country and culture permeates his wonderful works. What strikes immediately is the myriad of colours, brightening up the room’s plain creamy walls. Using traditional images from Mexican history and mythology, Pre Columbian culture and everyday life as a theme, Graham chose pointillism to add texture to his paintings, and surrounds his images with non-tonal blocks of colour. I think this contrast works very well. It’s a happy array of Mexican life I can identify with, having been to and fallen in love with Mexico.

Inside the Library, Graham placed five paintings, executed in acrylic in different colour schemes. The Water Carriers are clothed in beautiful pinks, and their clothes contrast with their blue-green surrounds. They carry red earth pottery in their arms. The sky is filled with a full orange sun sending golden rays on earth and sky.

In Bird Keeper is a beautiful image of a young innocent looking girl, her arms outstretched for the blue-red birds to delicately land and perch on. She wears traditional patterned dress and once again the sun plays such a great role - it’s rays spread life and joy. 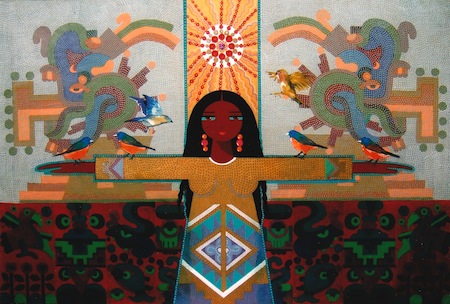 In Warriors are three bronzed bodies with magnificent feathered headgear hung with gold medallions; two are sitting not facing each other, maybe preparing for war.

Between them is a figure in white, either a chief or a priest. He may be blessing the warriors before they go off to fight. This painting is mainly done in ochres, except for the white clothing, the blue feathers and green trees and foliage.

In The Chase, the hunter, camouflaged like his prey in dark orange with brown-black flecks, is depicted in hot pursuit of a frightened animal. Huge rather quizzical birds look on in surprise and there is the sun again, it’s magnificent rays shining through a lovely pink flowering cactus.

Life is the smallest of the works and has a female figure clad in traditional Mexican clothes, holding a bird nestled in her arm. ‘Trees of Life’ surround her and the giddy sun pulsates with life and golden rays. Birds happily flying around her, everything here symbolises LIFE.

In the display case there are seven works, placed with Mexican textiles and books on Mexican symbols. Mayan Symbols has three panels. In the middle is a kneeling figure which could be a pregnant woman as there is focus on her pelvic region, as if there was a promise of life within her. Her face is in profile, her eye, heart and umbilicus are the only organs featured on her body. Her hair seems plaited with flyaway tendrils.

In Offering, a dog-like animal, mouth open, it’s huge eyes bulging, looks frightened, wanting to run away, as if it knew it’s fate. There is a snake and tiny little monkeys, painted in lovely colours. 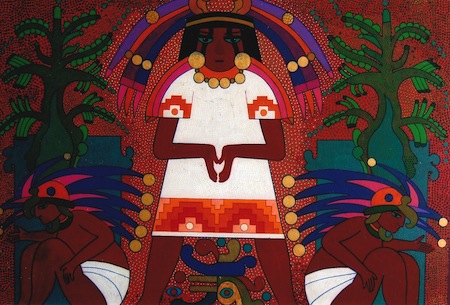 In Conversation, two chieftains or warriors with fantastic headgear are seated, engaged in a heated discussion. A surprised bird with a quizzical look on it’s face looks down on the two. Lovely colours again.

Aztec, a happy, lemon coloured figure in a dance-like position, his face sculpted with ancient features, holds an offering to the sun. In the corner sits a bird, watching.

The sun and birds often appear in Graham's paintings and in Mexican folklore.

In Escuintli, three grey-blue Mexican dogs, painted in a more realist way, are placed in a landscape of flowering cacti done in pointillism. These dogs have very expressive faces full of curiosity with huge, watchful eyes.

The Oaxacan Woman wears a lovely headdress, is dressed in a white embroidered gown and wears strands of coral around her neck. Her face has a dreamy, rather wistful expression. I wonder if it is her wedding day and she is contemplating her future. This painting is also executed in a more realist style and the woman’s face is a mix of races, Mexican, Indian and Spanish.

In Sentinel, the work is predominantly done in lovely blue-green colours and pictures a lone figure, perched on a rock protruding from water. A sea creature sits alone, surrounded by vegetation, watching and safeguarding it’s environs. The figure here is turned away from the sun. Birds in flight around it, look on. This scene has a feeling of a day ending, very quiet and very still.

This exhibition was a joy to behold and I strongly urge CAS members to see it. As I was sitting there writing up the show, a young librarian approached me to say that there have been many positive comments from the public about Graham’s work. I am happy to hear that Graham can now pursue his painting full time and wish him all the success in the world.