Jill's 15 ceramic works cleverly depicted aspects of the political arena, and its many changes, from 2003 to pre-election 2010. These satirical gems were great fun and showed Jill's wicked sense of humour!

There were four low relief sculptural pieces on the wall, and 11 sculptures in the display case - mostly teapots. These teapots were not designed to be functional, but to comment on the politicians of the day - perhaps the pots' dysfunctionality itself made further comment.

One of them was the 2nd Prize winner of this year's Annual Exhibition, De-sal Seaweed Tea, carrying the warnings of future ramifications of global warming. Some contained very recognisable characters. Pacific Solution was a stout and colourfully dressed Amanda Vanstone, gesticulating grandly. In Seaweed Tea in a Rising Sea (Rudd & Wong), Kevin was having a cuppa, and if you turned him around, there was Penny at the back of him. 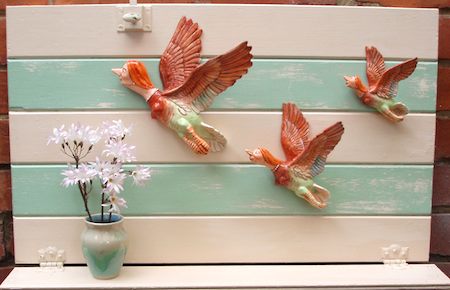 Just one look at some of these fascinating works would make you crack up laughing at their humorous content and their inventiveness. I was particularly delighted by Clay Ducks Moving Forward, a series of little winged Julia’s mounted on painted wooden board, which was actually an old cupboard door, complete with ledge and vase of flowers. But look closer and you would see careful, intricate work - the way the figures were formed and painted, the beautiful colours and detailed features. In Oasis, a wall mounted construction of raku fired paperclay tiles, the 'oasis' tile, with its beautiful abstract images in soft blues and browns, was laid against textural low relief tiles in earthy colours. At first glance, the earthy images also appeared to be abstract, but on inspection, revealed a flotsam of metal bits, cables, car bodies and other junk. Even more junk appeared in Superficially Green (another wall mounted tile piece), along with the bald head of another very recognisable political figure. As with Jill's other works, I enjoyed the content and comment enormously, as well as her creativity and great workmanship.

I could write about all of them, but I think you should go and see for yourself - I'm sure you will enjoy! 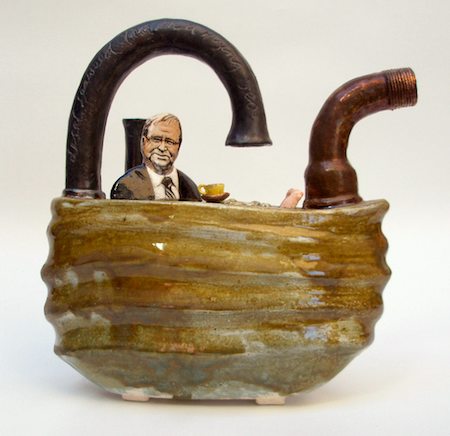