In John Kodric's exhibition of oils on canvas, 6 works hung on the library wall, and 12 works were displayed in the wall mounted glass cases. His theme and title of “Different Directions” included the many places he has visited and been inspired by; Melbourne and suburbs, Victorian country towns, interstate and overseas. Other “Different Directions” were his various styles and treatments of his subjects, from traditional landscape to contemporary juxtaposition of images, and abstraction. 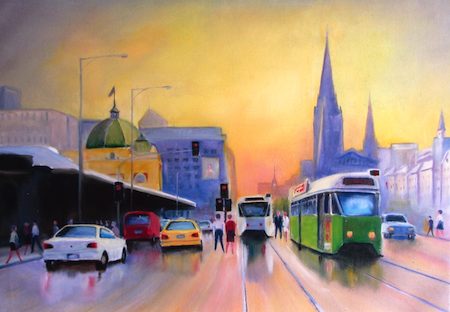 A further direction was to portray aspects of different places. In the Melbourne works, one may at first think, “not another Melbourne tram ...”, but a closer inspection of After Rain, Princes Bridge showed a very skilful treatment of light and images reflected on the wet road, and solid images of vehicles in the fore and middle grounds, with hazy blue landmark buildings in the background. Another very recognisable scene for Melbournians was Brunswick Street, Fitzroy, with the golden light of late afternoon reflected on the road. In Number One, the only water-colour, a series of white and coloured squares and oblongs in different sizes were arranged. In one of them was a figurative image of a racehorse and jockey, no doubt inspired by the Melbourne or Caulfield Cup.

In a different approach as well as subject, what appeared to be traditionally painted flowers in Daisies were actually springing from no known source, with no base, roots or pot. A surrealistically framed urn stood next to them. More surreal was the giant rose-bearing, high heeled foot in a flat desert landscape, populated by just a lonely phone booth and letterbox, and two tiny male figures and several unconnected telegraph poles in the distance – and the foot. Titled She Loves Me, I felt that it left an intriguing mystery in the mind of the viewer. Could this be about love, or broken communications?

The sharpest change in direction was the completely abstract work, Royal Blue. , textural squares and diamonds were arranged against a hazy background of warm and cool colours, glittering with gold-yellow specks. The background reminded me of the atmospheric lighting quality in John's tram paintings, also of the hazy mix of light, cloud and water vapours in the works of Turner. 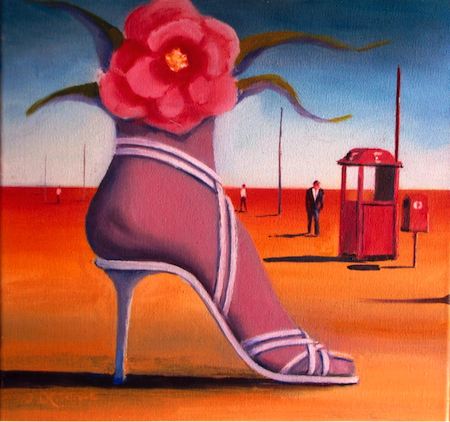