Paintings in oils, and in water-colour, ink & graphite

The current exhibition by Anita van Grootveld at the Fitzroy library, of works on paper, is a very competent display of images distilled and abstracted from natural phenomena during the course of the artist’s travels in Thailand, Europe and U.S.A.

Anita is a highly skilled and accomplished artist, born in New Zealand, who’s CV includes a BNZ scholarship for emerging artists and an Honours degree in jewellery design and creation. She has a diverse arts practice which encompasses the design of jewellery and textiles and has taken part in numerous group exhibitions with the CAS and other groups and has had a solo show at the Brumfield winery in Yarra Valley.

The origins of the work on display come from sketches undertaken with pencil and watercolours during her travels and these impressions were transformed into work which has been predominantly executed in watercolour, ink and graphite on paper and two paintings are created by oil, on watercolour paper. The work is on a small scale with the bulk of the paintings in a 25 x 31 cm size and the largest painting 50 x 70 cm.

I was reminded of the work of Paul Klee when I saw this exhibition. He also worked on a small scale and developed a very individual style although influenced by cubism, expressionism and abstraction. I felt that there was something in his philosophy of art which reflected by Anita’s work. He said that: “Art does not reproduce the visible, it makes visible.” In his travels in North Africa his sense of colour was awakened and he was able to detach colour from physical appearance in a move to abstraction but the image created revealed an inner poetry or essence of his subject.

Anita’s work also shows an awakened sense of colour line and form and reveals an abstraction of direct experience which goes to the essence of the subject depicted. Her colours are subtle and not strident and the blend of watercolour ink and graphite creates interesting and varied marks which work in harmony. 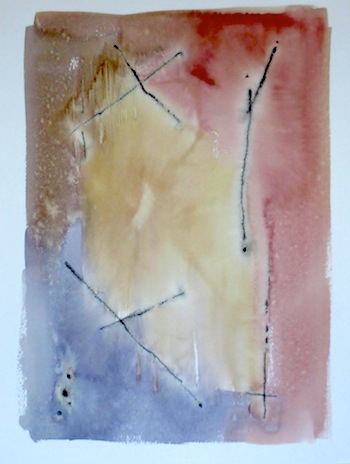 I think that it is particularly difficult for many painters to abstract a visual observed image to a level of convincing harmonious relationships and I felt that Anita had achieved this particularly with El Terreno Terco (Stubborn Land), La Tierra Quemada (Scorched Earth), and El Terreno #2, which revealed a bold simplicity of relationships of form and colour. These paintings were based upon observations of scenes in Spain but were reduced to an abstract essence. 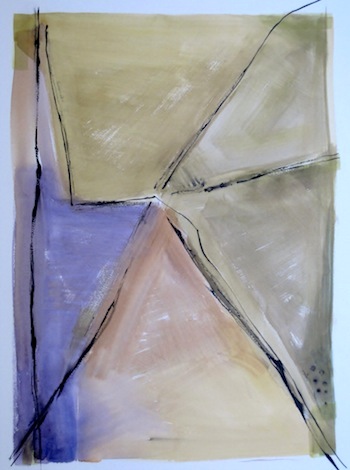 I also enjoyed the work in the annex to the library which was displayed in glass boxes. The oil on paper worked very successfully and had a translucent effect, and the Crop Circles and Colours of Gaudi series were harmonious and balanced.

I urge members to see this show.