Art at Burnley Harbour 2010, the Contemporary Art Society of Victoria’s Open Art Exhibition was held in McConchie Reserve this year, and not at the usual venue of  Burnley Harbour, (due to maintenance work being done on the Monash Freeway, by Citylink)

This year’s exhibition was held adjoining the harbour in three large marquees – generously sponsored by Citylink. There was a hint of Arabian souks in the large and decorative marquees. These bright tents were set up on the grass and were full of colour as the many visitors mingled amongst the art works. It was such a hive of activity with hard working committee members and other volunteers manning the show, clad in bright fluoro vests with smiles on their faces. 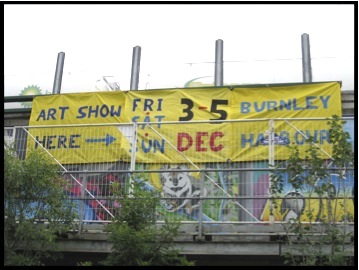 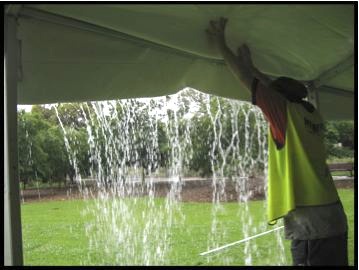 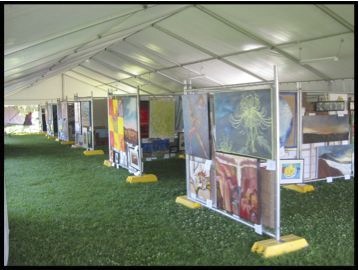 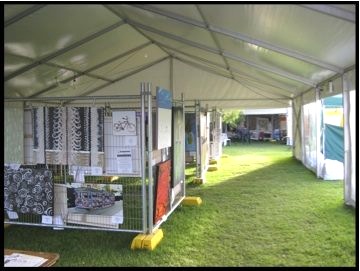 Top Left: The Freeway banner!   Top Right: It poured during setting up of the Marquees!
Bottom: The show finally set up, lights on!

An exhibition of this magnitude offered something for connoisseurs of each and every art genre. Some contributing artists chose to offer social commentary, one such artist was Aldo Bellemo’s work ‘Australia Burning’, a work which covered many areas: issues such as ‘the boat people’, the Tampa issue, and the recent overwhelming bush fires. An engaging work in mixed media.  Jenny Pemberton Webb offered four works using a mixed media approach in warm yellow and black painted on newsprint on a canvas backing. The subject matter of signs, cows and a black dog were reminiscent of the cattle yards in Kensington, yards we passed each summer on our way for holidays in Torquay. These works struck me as a comment concerning our treatment of livestock and our lives based on consumerism.

Sally Swan had created six pieces of work using acrylic paint on wood with a subject matter of symbols, words, part words and messages. Urban signs and letters created a contemporary urban paint collage of mixed and matched letters and images. Words and letters borrowed from the urban clutter of signs and advertising that the consumer is confronted with every day. Could it be that the depletion of our natural environment continues as the development of urban environments continues on in an unfettered manner? 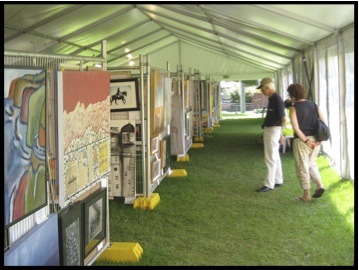 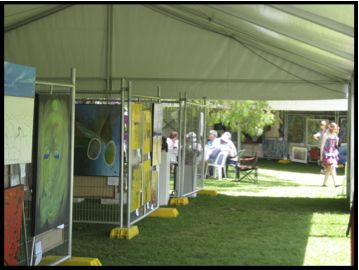 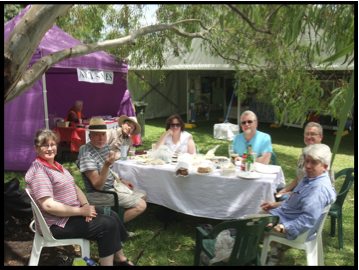 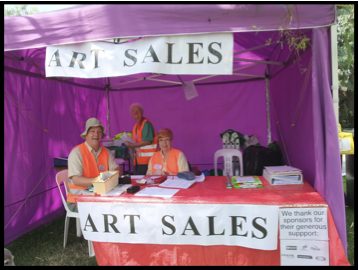 Top: Friday 8am - the first guests turn up!  Centre images: visitors enjoyed the CAS cafe.
Bottom: Some of the CAS committee in the purple sales tent!

Victoria’s recent bushfire disasters were evident in other works as expressed in the work by Lily Day. ‘Shadow Land’ with its vision of grey smoky skies, burned out trees looked like the Kinglake area. ‘The Ghost of Ariadne’ conveyed the same feeling of destruction.  Shelley Dart echoed this topic in her work ‘The Close’ with fire and red hot wind.  ‘Trendoids Dreaming’ by Robert Lee, could have represented bushfire areas with stick like trees in beautiful tones of red, orange, yellow and green. ‘Resurgence’, a work by Sue Lack undertaken with earth colours seemed to bring the bush back to life after the disaster. Tanya Korin’s  ‘Sunset’ also echoed the earth colours, dark brown bush with a sky of burnt-gold moving into sunset red and a  violet.

Works depicting nature were exhibited by Joy Elizabeth Lea’s, works undertaken using oil on canvas and rich in colours of bright orange, dark reds, grey green tones portraying abstract images of dense bush, entwined branches and perhaps a quiet little spot for meditation. ‘Diamond Creek Eltham’ by Robert Dorein was a scene of serene bushland with a quiet pink- grey creek running through it. Claudine Deese’s ‘Nature’s Chaos’ in pastel and charcoal using autumnal colours to depict tree branches entwining, leaves falling to the ground, a work full of excitement and motion. Nature was the subject used by Suzanne Graham with her fine pen drawings on paper of  ‘lorikeet resting in a gum tree’ and ‘Sunflowers’. 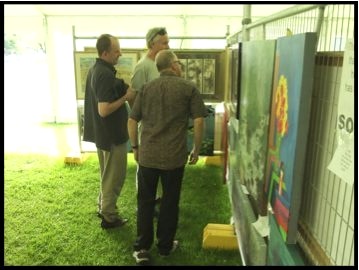 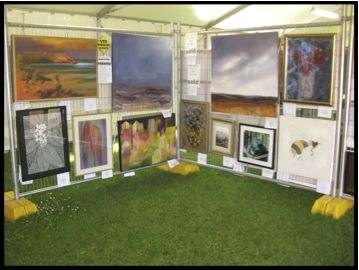 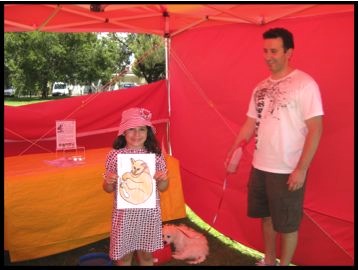 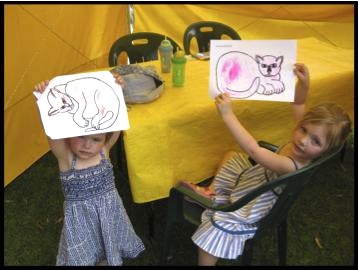 Images of people and drawings taken from life were approached by artists using  people as the subject with various styles, colours and approaches. Kellly Gatchell Hartley tackled a painful subject in ‘Endangered Species’ . This work depicts a female smoker in cool green-yellow colours, emaciated bony looking, and cigarette in hand; surrounded by a dark red background. This work made a strong statement against smoking. ‘Harry’s Home’ by Anne Klawir also struck me as disturbing. Harry is missing and there is only the outline of a child placed in a room with dark old fashioned furniture, wallpaper on the walls and what looks like lino on the floor. People without faces are also placed in the cubic style ‘Family Portrait’ by Fiona Link Freeman. Although the colours are brighter here there is still a feeling of something lost, not present. I thought there was a symbol of family tree in the painting denoting family roots and peoples’ relationships to one another. The De Chirico style ‘Dinner for Two’ painted by John Kodric placed a naked young woman pirouetting on top of a cabinet, rather like the wound up dolls on music boxes, a Tales of Hoffman figurine. She is surrounded by Italianate architecture, arched doorways and in the distance figures of men in dark suits. There is a table set for two but no one is there, once again an absence. I wonder who will be sharing a repast there? ‘Carnivale’ in Venice’ painted by the same artist, places two beautiful but masked women in a Venetian scene of arched buildings and canals. The works are beautifully and meticulously painted. There is a series of beautiful females in vibrant and rich colours by Jennifer Croome. Chatting in a cafe in ‘Sisters Under the Skin’, or in sumptuous ballerina like dresses, they seem to be friends and happy to be together. Once again this artist was in absolute control of her technique and media as well as knowing her subject matter very well indeed. Then completely different ‘The Girls’ by Catherine Campbell  minimalist. bikini clad outlines marching down the beach and Sue McCalls ‘Behind the Screen’ in mixed media. In this work in the background one can discern a silhouetted female form with what looks like bronze arrows moving in transit across her body. 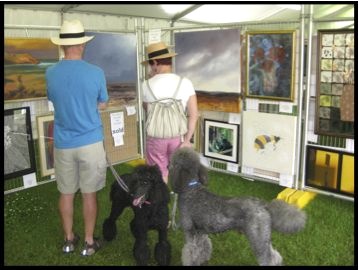 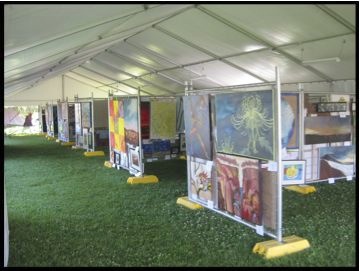 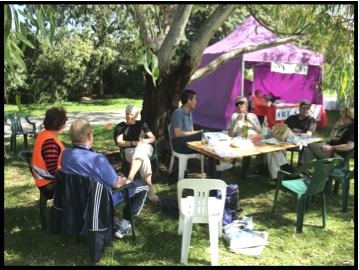 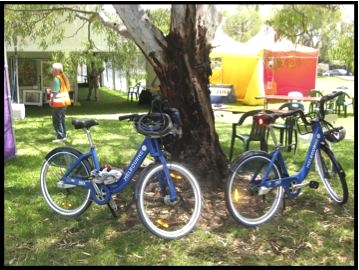 Top: Dog lovers buy art too!
2nd: Another view within the Grand Marquees!3rd: More visitors taking  a coffee break!
Bottom: Some ingenious folks even hired bikes to ride up from Federation Square!

Evidence of an urban theme is depicted by Aldo Bellemo, his “Belgrave Station’, a realist work, one which is so real you can actually imagine yourself being there with the train moving into the station, ready to alight. Lovely use of colour, soft beige and sienna buildings and fresh green foliage, Hermann Schwaiger created  ‘Flinders Street Railway Station’ in a soft edged almost impressionistic style. It could be a rainy night with shimmering floating lights and colours. “ The ‘ESPY’ by the same artist is a cityscape near the sea undertaken in a similar soft edge style. Another work also done in impressionistic style is ‘Chapel Street’, depicting a busy cosmopolitan scene of people, trams, crossing lights reflected in a rainy and watery atmosphere. Hermann uses rich colours and loose but well controlled brushstrokes lending them competently to the subject matter.

There were also very interesting photography works in this exhibition, with black and white ones being my favourites.

In the sculpture garden several large works were interspersed with small ones.  Paul Smith entered ‘Untitled’ a large work that was both enigmatic and striking, which was executed in limestone. In an open hand with an extended index finger, there was cradled a mysterious object which could have been beautifully carved lips. What comes to mind here is ‘Silenzio’ - silence. Paul’s second work ‘Seedling’ was a large limestone sculpture of a seedling bursting into life, it was both minimalist and very organic. Helen Clancy’s ceramic work was of a large female torso with lovely feminine curves and glazes of sandy green and golden brown, running up and down the body with splashes along the thighs.  A very arresting piece that was titled ‘Assured of Certain Certainties’, here a woman with face tilted up in a half-quizzical look, is seemingly asking……… what is she certain of?

A set of clay pots in dark chocolate brown with accents of white by Suzanne Kaldor were accompanied by ‘Flask, Grandma’s Medicine Bottle’, antique looking ceramic with a playful arabesque shaped stopper. Aesthetically pleasing work as was ‘Frog On The Rock’ a humorous fantasy of a little white frog perched on a green leaf spread on a rock. Melanie Steptoe had 3 crystal cubes with acrylic collage images suspended inside. Jesus Moreta’s female figure, ‘The Dancer’ in papier mache had voluptuous curves, lovely pose and rich bronze like finish. Edith Meaklim’s ‘Reclining Figure’ created using resin with bronze pigment, was a confident semi abstract female body as was her ‘Mother and Child’ an abstract in polystyrene and paint. 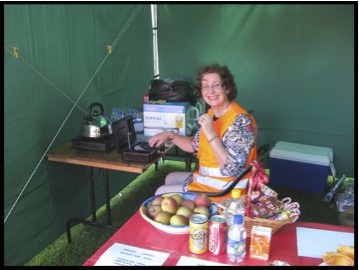 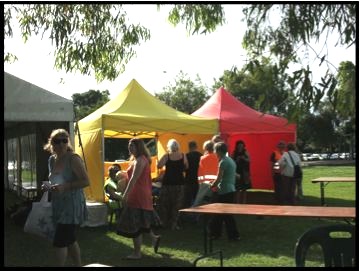 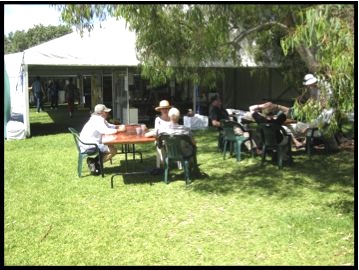 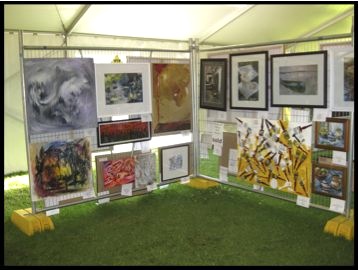 Top: Joy working hard in the Cafe!
2nd: The “Kids Zone” was popular with the parents as well!
3rd: More visitors in the Cafe area.
Bottom: More art!

There were so many other works I would have liked to write about, but in an exhibition this size this was impossible to do. This exhibition showed the endlessly rich variety in which various topics including the human image can be presented. Proudly there were many sales and many wonderful comments by the visiting public, who came in droves despite the inclement weather, the heat and the rain.

This exhibition was a very impressive enterprise and so much hard work and dedication has gone into it by the artists, organisers and sponsors that I hope I have given it justice in the write up. The only thing left is to extend congratulations and thanks all involved with it. Well done. 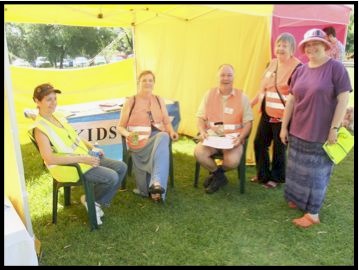 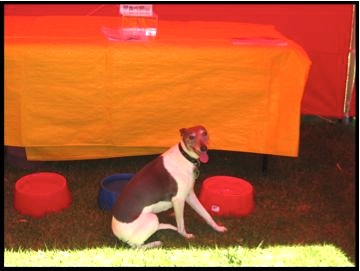 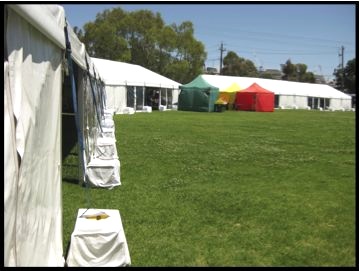 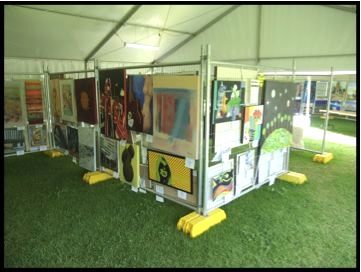 Top: Some of the helpers have a break.
2nd: “Lucy” at the “Dog cafe!”
Rest of page: The Citylink Marquees  hold over 600 artworks, in the lovely surrounds of McConchie Reserve, Richmond.
Thank you to Citylink and the City of Yarra for your generous support!